When I built the stand for my homemade bandsaw I joined the corners with dovetail joints that I cut on my bandsaw.

I later made a few more joints while shooting a video demonstrating my technique. So then I had some sample dovetail joints that I didn't have any use for. I figured I might as well break them to see how strong they are.

I used the same testing apparatus that I used for my earlier joint strength tests, with a hydraulic bottle jack to apply the force, a bathroom scale to measure the force, and a digital camera in video mode to record it.

I had to use a lever arrangement to split the force from the jack, with two thirds going to a fixed pivot and only one third applied to the scale. That way, I wouldn't exceed the 300 pound limit of my scale.

I used 1/2" steel rods for the pivots, and another piece of 1/2" steel rod on top of the jack. This ensured that the forces were applied exactly where I wanted them to be, which should help accuracy. It's a bit hard to see in the photo, but you can click on it to magnify it.

I thought it would be fun to compare the dovetail joints to some other joints, so I also made some box joints on my bandsaw. These didn't come out all that accurately, so I had to use lots of glue and gave them lots of time to dry.

I also made some finer, much more accurate finger joints with my screw advance box joint jig. Those are the two joints on the right. I had the feeling these might be a bit stronger, so I only made them half as wide.

I added some dowel pins to mount my joints by. This would prevent the joints from slipping upwards as I applied force. I also made a cutout in my mount where the actual joint would be. That way, the mount wouldn't be supporting any part of the joint itself.

I cut a notch into the joints at exactly 8 cm from the inside corner. I put a 1/2" steel rod in the notch and pressed against the rod with my jack. That way I could be sure that my force was applied at exactly the right distance from the joint.

The table at left shows the maximum pounds of force read on the scale for each joint. Keep in mind that the actual force applied to the joint was three times as much. It took over 540 pounds, or about 245 kg of force to break some of the joints. My boards were 10 cm wide and 2.7 cm thick (about 4" x 1 1/16"), and the force was applied 8 cm from the inside corner. With the distance to the joint at 8 cm (0.27 feet), each pound on the scale is three pounds at the joint, and works out to 0.8 foot pounds, or 1.07 Newton meters of bending moment.

The bandsaw cut box joints did slightly better than the dovetail joints, but the difference is too small to draw much of a conclusion from. I was actually surprised at how well the dovetail joints held up, considering they had fewer pins. But even with more fingers, the box joints took much less time to cut because everything is just simple and rectangular.

The finer box joints from my screw advance box joints did better though. Given that they were half the size, I need to double the force to adjust for having only half as much joint. Adjusted, they took about 1.4 times as much force as the other joints.

Here's one of my dovetail joints after testing. For the most part, it failed along the glue line.

Here's one of the box joints. Again, failure is mostly along the glue line.

Here's the coarser of my screw advance box joint jig joints. Some of the fingers ended up pulling through, but the top half of the joint actually stayed together. So I think I was pretty close to the strength of the wood.

And here's the finer of my screw advance box joint jig joints. The wood ripped apart next to the joint, with the joint itself largely intact. The part that ripped was a relatively light piece of wood, so it was probably not as strong. This joint actually failed at a lower force than the joint with the coarser fingers, so I think the wood was a factor.

Overall, I expected my screw advance box joint jig joints to be stronger, but I have to say, I'm actually impressed with how well the coarser box joint and the dovetail joints held up.

Seeing that the wood around the joints was failing for with my screw advance box joint jig joints, I'd say these are probably about the theoretical maximum strength achievable for this type of corner joint. And with the dovetail joint being two thirds as strong as that, that's actually quite impressive.

But I think a dovetail joint can never be as strong as an ideal box joint with narrow fingers. Basically, with the dovetail shape of the tails, the tails have an inherent weak spot at their narrow base. If the wood were to fail, this is where it would fail. Of course, you can always make the tails bigger, but then the pins will fail. Box joints don't need to make that sort of compromise.


You probably want to see just how the joints popped and failed. Well, I also made a video version of this article, so enjoy...

Testing mortise and tenon joints against other joints types for strength 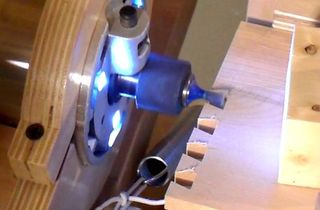 Dovetail joints on the pantorouter

Box joints without
a dado blade

Pocket hole vs.
mortise and tenon
More about joinery

Back to main Woodworking index