I wanted the frame to be fairly wide. As material, I used some 2x4 construction lumber, as usual. Although because I needed to plane it down a fair bit, I decided to start with some relatively crooked lumber, seeing that I could straighten it as I planed it down. Hopefully, this won't be a choice I will regret.

The profile I made was about 8 cm wide. A section of the final profile is shown on the left.

I cut the inside rounds by using the table saw cove cutting technique. I wanted some relatively large diameter inside rounds. I don't even know where I could get router bits that would even approximate such curves like that. A raised panel cutter could possibly have been used for the initial curve 'B' though.

As it is, the profile is entirely done as table saw coves and straight cuts. I started by cutting a bevel 'A' with the table saw, so that I wouldn't have to make as many passes to cut cove 'B'. Next I cut cove 'C'. I originally intended coves 'C' and 'D' to be one cove, but once I realized I put my cut for C too far to the right, stopped cutting that one deeper, and started a new cove for 'D'. I didn't want to go deeper on it than I did, so part of cove 'C' can still be seen. This wasn't intentional, but I liked how it looked, so all is well.

I made cut 'E' with a jointer afterwards, to give the frame a general inward sloping look. After that, I cut the rabbet F with two cuts on the table saw. I also decided the frame would look a bit better if the outside was bevelled towards the back, so I cut the bevel G last, with the table saw.

all in all, with the multiple passes required for some of the coves, I passed each piece of the frame over the saw at least 15 times. Making moulding on the table saw can be time consuming!

I glued the splines into the long pieces of the frames first, so I wouldn't have to worry about positioning them right once I glued the whole frame. At the thin end of the profile, I clamped it a little bit, just to make extra sure the joint was tight.

It's important that the grain goes across the splines, not length wise. I made the splines by cutting a series of slots into the end of a piece of 2x4 on my delta tenon jig.

After making five cuts in the end, I just cut the splines off with a band saw.

The first two joints I glued one at a time, much like I describe in my article about miter joints

With the frame so large and long, to get the last piece in accurately, I dry fitted it, and then clamped the ends of the frame securely to my workbench. This reduced the amount of alignment I'd have to worry about while the glue was wet. With the splines cut to be fairly tight, I really didn't have much time to move things around before the glue gets too firm to budge.

And with the last piece glued in. I put a few clamps on it to make sure everything was in tight while it dried.

I had a small bit of vertical misalignment because my splines and frame parts were not cut consistently. So I used a chisel trim the shape around the miters to get the alignment all flush.

The next step was to stain the frame. I wanted the colour to be 'just so'. I ended up mixing some water based varnish with a bit of acrylic artist paint in a small plastic container. It took a few adjustments to get the colour just right. I still used less than one tenth of a tube of paint for the whole frame.

I applied the stain just by rubbing it on with a piece of paper towel. This wasn't ideal because the paper towel started to disintegrate as I did this. Cloth would have been better.

Because my 'stain' was actually about three quarters varnish by volume, it was really more of a varnish coat. I ended up putting two layers on. The shot at left shows just starting the second layer, so the frame had not yet reached its final colour.

After letting the stain/varnish mixture dry for a few hours, I put two more coats of varnish on top of it for a nice smooth finish.

Because I only used 2x4 lumber for the frame, I only spent around $4 on wood. Add another dollar or so for the paint and varnish, and it ended up being a very cheap picture frame. Unfortunately, the plexiglass front for the frame cost me around $40, so that blew the other expenses out of the water. 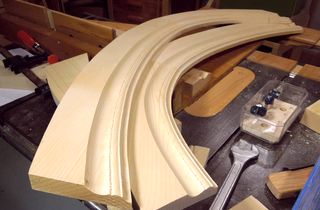