I have built a total of five desks like this so far. The first two here, then another two that I built here (one of these I gave away), then another for a friend (didn't take pictures). Two are in use in the house (see them here and one in my big workshop garage see here). I wanted another one to take to my in-laws to get some work done there.

I built this one out of hardwood, mostly maple. Most of the wood came from large shipping pallets. You can see some of the nail holes in it. So in a way, it's a pallet wood project, but with planed wood so it doesn't look like crap.

Cutting the wood to lengths using my large table saw sled, then squaring and straightening the pieces and planing them. It's usually more optimal to do the planing before cutting to length to avoid snipe, but if there is any twist or bend to the wood, it's less wasteful if it's cut to length first. Thickness planer snipe can be avoided by feeding the pieces through back to back.

I needed three dadoes just over 15 mm wide, with precise 30 mm spacing for the vertical adjustment part. I set the fence by measuring from the blade with callipers. I marked the tooth I measured from so I could make later measurements from the same tooth for consistency.

I usually don't bother setting up a dado stack, but needing three identical dadoes in each of four pieces, it was worth the trouble. The initial fit I got was precise, but too tight. I needed a loose slide, so I re-cut all the dadoes with the fence 0.3 mm nearer to the blade than last time to widen the slots.

The top horizontal parts that mount the legs to the table top are tapered. I can get two of these out of one rectangular piece. After cutting it with a bandsaw, I smoothed the cut on the jointer.

The wood was a bit thicker than I needed, so I cut it down a bit on the table saw.

Here's how the legs go together. The grooved part is for the height adjustment, with a horizontal part of the leg on the top and bottom.

I'm joining the leg parts together with mortise and tenon joints, using the metal pantorouter. Normally I'd have one big tenon, but I wanted to try these plastic tenon templates. They are smaller, so I used two of them.

With a long 1/2" spiral bit in the router, I ran into some vibration problems when sweeping side to side. So I cut these by making a series of plunge cuts. First on either side, then in the middle, and then between my previous cuts. After that I moved it side to side while slowly plunging in to clean the cut.

I only had four joints to cut. Even the identical joints weren't quite identical because they are a mirror image of each other, so I had to mount one piece one way, the other the other way around (the mortises aren't laterally centered). So it was easier to just make a line on the wood where the mortise goes and line it up to that instead of setting up stops.

The tenons are towards one edge of the wood so that the corresponding mortises are closer to the center in that piece. A lot of material needs to be milled away, so I cut most of it off with a table saw and bandsaw before milling the tenons.

Cutting the tenons, first half depth, then full depth.

This is how the legs fit together. The height adjusts from couch height to standing desk height.

I needed something to support the legs side to side, so I'm making a bracket to go on the back like this.

The bracket is joined with a bridle joint, which I'm cutting with my quick set tenon jig

After cutting the tenons, I move the stops inward by 0.1" (the thickness of my blade kerf), then cut the bridle part of the joint.

For the bridle part, first I cut on either side, then in the middle to remove the rest of the material, then I move the lever side to side while moving across it to flatten the bottom of the joint.

I cut a rabbet in the vertical parts of this bracket, plus another notch cut to fit the bracket around the legs.

This is how it fits on the legs.

Gluing together the joint.

I'm adding some dowels as alignment pins for this bracket. I started by drilling 1/2" (12 mm) holes in the corners of the bracket, then I clamped the bracket to the legs, and used a hand drill to drill just a millimeter into the leg parts.

I then unclamped it and finished drilling the holes on the drill press. The hand drilling was just to get the locations precisely transferred.

I drilled a hole every 3 cm along the legs for bolting them together at different heights. I marked these off with a tape measure. Before drilling them, I also used a very thin blade to cut a shallow groove along the slot where the holes go, to help me center the drill.

There is often a bit of tearout where the drill exits the wood. So I drilled all these holes to go almost all the way through, with only the brad point of the drill cutting through.

I then used these small holes to line up the drill from the other side and finish the holes. No tearout this way.

I added a slight chamfer to the holes with a countersink bit.

Clamping the legs parts together, I used a drill bit to transfer the center of every third hole (for three holes) to the mating piece.

I drilled the holes and added a counterbore to snugly fit a 3/8" nut.

With holes every 3 cm on one part, and holes at 4.5 cm spacing on the other part, I can lock the height at 1.5 cm increments by putting the bolts through different holes.

I used part of an old headboard from the garbage for the desk top. Here cutting the ends with my table saw sled.

The "good" side of the headboard still had a purple-ish tinge to it from the stain where I tested scraping off the varnish. So I used the back of it as the "good" side.

Scraping was too slow, so I switched to the belt sander, then back to the scraper to get a smooth surface.

The wood has a solid wood core, but with two layers of veneer on either side. One layer is perpendicular to the grain. This makes these boards act more like plywood, in that it prevents sideways expansion and contraction of the wood.

Because of this, I can put trim around it without having to worry about what happens when the humidity changes

I joined the corners with finger joints, using my quick-set tenon jig.

I'm using the template feature of this jig to repeatably cut the fingers of this joint. A bolt (in my right hand) needs to be lifted to move from one notch in the template to the next. More on that here

I joined two of the trim pieces to an L-shape, then glued it on the board.

I then glued the next piece on (joining the corner and long edge), then added the final piece, using clamps to squeeze the joint shut (the corner joints were fairly tight)

Then using a bandsaw to round the corners, and smoothing it by hand with a piece of sandpaper.

Back to working on the legs. I'm adding some threaded inserts. These have a 1/4" Alan socket. I'm using the back of a hexagonal screwdriver bit in a drill to drive them in.

I needed a whole bunch of knobs for this desk. These add up in cost, so I'm making them out of plywood and carriage bolts. Here cutting them from a paper template.

I filed the holes slightly square-ish, then whacked a carriage bolt in the knob.

The knobs allow the back brace to be mounted without any tools.

I needed to add another piece of wood to the back brace to have a place to add knobs to that.

With the legs and back brace assembled, I'm drilling through both parts to transfer the locations for the threaded inserts.

I actually drilled the holes in the legs and back brace with a drill press, but used a hand drill to drill slightly through to transfer the locations.

I'm also drilling some small holes through the legs to transfer the location for some alignment dowel pins.

Then drilling the holes for the dowels and the threaded inserts.

I'm using a big scrap of wood with a notch cut in one side as a drill guide and depth stop. It keeps the drill perpendicular, and once the drill's chuck hits the block of wood, I know I have drilled deep enough.

Again using a screwdriver bit backwards to screw in the threaded inserts. Using my block of wood again to make sure I get it in straight.

Finishing up the knobs. After painting them black and varnishing them, I'm gluing the carriage bolts in with some epoxy.

The alignment pins help align the legs with the top.

With the pins already ensuring proper alignment, it's already lined up with the threaded inserts, so the knobs are much easier to put in.

Now using the 3/8" knobs to attach the legs at maximum extension.

At maximum height, it makes a decent standing desk. But that's not what I built this table for.

The intended use is for it to be a really low desk that I can pull up to a couch. And for that, it needs wheels. For this one, I'm using rollerskate wheels (I get these for free from discarded in-line roller skates).

A 5/16" (8 mm) bolt fits snugly in the bearings. I'm just screwing this bolt straight into a slightly undersized hole in the wood.

Taking the desk for a ride - just to test it. The wheels roll really well.

And testing it on the couch. 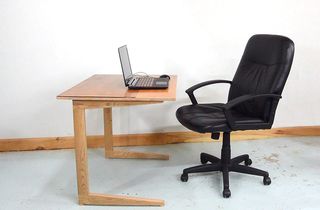 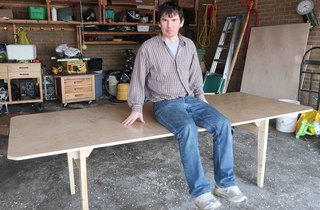 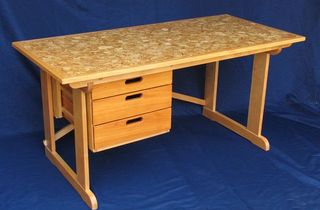 Knock down table and plans for it

Plans for a similar table 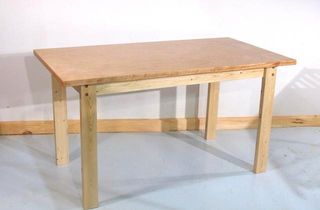