This one is not at all about woodworking, but I found mowing through tall grass just so much fun - way more fun than driving the ATV. So I made a video about it. It took less than an hour to film, but it had a lot of fun filming it too.

But why would anybody even want to watch this? Then again, some of my videos that I didn't expect to do well are really popular. For example, I was unsure whether to even post the video about this homemade scrollsaw, yet it has done really well. And my recent videos about draining plumbing and the wasp sucking machine XL have also done unexpectedly well. And I found myself watching this video: Extreme snowplowing, and it has nearly two million views, and it's just a snowplow plowing a road. So something can be appealing about that sort of video.

Some open spaces on my rural property have not been mowed in years. Unless mowed from time to time, open space turns into bush. So I bought a used lawn tractor and started tackling some of the areas.

The lawn mower chewing through the tall grass, with a jet of grass and debris shooting out the side, very satisfying. Of course, for grass this tall, what you really need is a brush hog. The lawn mower doesn't get all of it, so I need to take many passes over some of it.

After romping around randomly for a while, it starts to look a bit like lawn. Ideally, I'd rake up the clippings, but I'm not that concerned about turning it into nice lawn. And I kind of like the "trail of destruction" look!

Having had so much fun in the knee high grass, wanted to try it in the really tall grass! This grass is taller than I am. I also played around with a camera taking time-lapse photos that day, which captured some neat random photos. I used a camera for capturing photos of wildlife. Some friends who hunt on the property set up some of these, and seeing the photos from them, I bought one too, just as a toy.

It took a lot of passes to get some of that grass cut down!

The problem is, for safety reasons, the front edge of the mower is lower than the blades. This is very good at keeping the blades from hitting solid objects or accidentally digging into the ground. Normal grass will just stand up after the front lip of the deck has passed and get cut anyway. But really tall grass is long enough that the front edge will prevent it from standing up under the mower. This is especially true for the stiff stems of tall thistles and burdock.

Lots more mowing left to do. But realistically, if I mow some of this every other year, that's more than enough to keep it from turning into bush.

Or maybe I should get myself a real tractor, and a brush hog! Oh, that would be so much fun!

I shot that video in September 2014. Then in May 2015, Jimmy Diresta made a lawnmowing video. This inspired David Piccutio to make one, and since then, a whole lot of people who make woodworking videos on YouTube have made lawn mowing videos:


Seems odd to have inadvertently started something. But then again, all those "harlem shake" videos never made any sense either.

Checking the links 7 yars later in 2022, I see that three of the videos have been taken down by their authors. That's the problem with linking to external stuff, it disappears over time.

I also made a #shorts version of this video. This link takes you to the old youtube interface for viewing this. Like you, I find the #shorts interface very annoying when usign a PC.

I have been mowing around the edges of the fields with the mower to try to keep the bush from encroaching on them too much. Some of the tall grass there has saplings in it. I tried just mowing straight over these, and, surprisingly with a few passes, it works! It is very satisfying in a way. So I made a quick video about it.

Surprisingly, I haven't wrecked any bearings of the deck with it just yet, though I was half expecting to. When I bought this mower second hand two years earlier, I had to replace half the bearings for the blade spindles. But this sort of abuse, as far as I can tell, hasn't wrecked any yet (last time, I could tell the bearings were shot just by the sound and by wiggling the blades back and forth).

While mowing, one time, I saw a big rock, bout the size of two fists together, kicked out from under the deck. I figured that had done some damage for sure, but couldn't see any signs of damage. So I have become bolder about what to try with the mower.

Unlike a typical 3 hp push mower, the spindles are only coupled to a pulley, which is to say, there isn't much of a "flywheel" type effect on the other end of the spindle, so if the blade hits something, it just comes to a stop without bending the crank shaft like it would on a 3 hp mower.

The steadycam you already own (but didn't know) 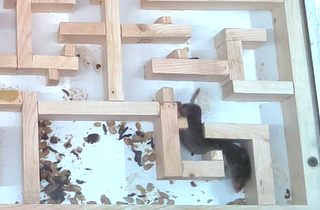 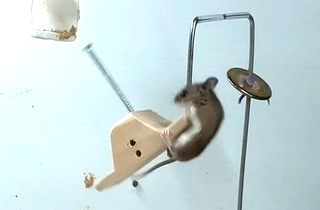 My big garage workshop on the property 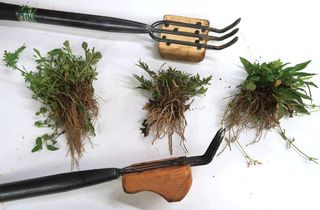 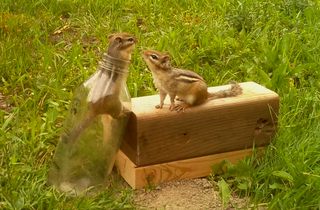 Chipmunk in a bottle experiments