This one is best viewed as video. But for those who don't have access to high speed internet (like my mom), and for those who want more details, I wrote up a bit of a summary with pictures.

The deck at one of the cottages at the family camp, Amogla camp, had gotten smashed over the winter. My first reaction was "how the heck did that happen". But we had some unusually heavy snow this winter, and I think it slid off the sheet metal roof as one avalanche, smashing the railing off the deck.

So... How to fix it?. To really fix it, the whole deck should be replaced. It's 27 years old now, so parts are quite weathered. But there was limited time and much to do, so I repaired it. Should be good for five more years, maybe ten.

The deck supports were cedar beams, about 12x12 cm, with bridle joints at the ends to hold the railing posts.. My dad glued these all with Weldbond, and put roof cement at the top to keep water from getting in. Looking at the broken joints, this technique was quite effective at keeping water and rot out.

For two of the joints I cut out what was left of the post with a reciprocating saw (a Sawzall, as they are often known, though this one was not by Milwaukee, so it's officially just a reciprocating saw). Those saws are awesome at cutting through nails, though the blades don't last terribly long.

A 2x4 fit quite nicely into the middle part of the joint.

I salvaged as much of the existing railing as I could. here's cutting off the splintered parts of the boards, again with the reciprocating saw.

With the help of my mom and my brother, we lifted it back up to the porch.

But the railing didn't quite meet the porch. On further investigation, after prying off some of the deck boards, I found the whole deck had pulled away from the cottage a bit!

It used to be attached with mortise and tenon joints, and those joints were also rotten.

How to get it back together? A tractor would have been handy to push the deck back on, but we don't have one.

So I hooked a chain around a foundation on the far side of the cottage and attached that to a come-along style winch, pulling the deck back onto the cottage.

This didn't work as well as I had hoped. I had to hook the winch on in different places to get the deck to budge, and then the beam I hooked it onto was starting to come loose.

That beam, on closer inspection, was broken from the avalanche that had hit it! Arrgh, this repair just got more complicated!

In the mean time, I screwed some 2x4s to the bottom to tie the deck to the building so it couldn't slide out anymore.

I have a piece of plastic foil on the ground so I can lie on my back without getting muddy. I messed up my shoulders working in a tight crawl space on my belly, and it took months to get better. Lying on the back is much better — allows for a more comfortable working position.

We still had some beams left over from when we built cottages. This one had been outside for a while, so it's grey and weathered. It's also a bit twisted, so I used a little hand held power planer in my dad's workshop to plane it a bit straighter.

The original deck was supported by cedar posts in the ground. But the problem with that is that those posts eventually work their way out of the ground from frost heaving. With the new beam in place, I needed different supports anyway, so I just cut the old posts off with a chainsaw. The new beam is supported by cinder blocks stacked on pier pads. I think pier pads on top of the ground are a better system. They also lift from frost, but at least they settle back down. They are also much easier to make adjustments to.

With the support/foundation worked on, I could finally get back to re-attaching the railing and replacing broken boards.

The railing isn't as stiff as it used to be, but still strong enough for sitting on or leaning up against.

I'm sure a lot of people will comment that the deck just needs replacing. But I only had part of a weekend to spend on this. As it was, I used very little new wood to fix it.

Of course, an avalanche off the roof may smash it yet again, but so far that's only happened once in 13 years. Besides, the whole reason we put a sheet metal roof on the cottage is so that snow CAN slide off of it, so we won't need to shovel the snow off when there's a heavy snowfall.

The front foundations of the cottage have gone all crooked over time. Foundations do move in the soil with frost. No point in putting a new deck on it without replacing those foundations, and that will be a bigger job! 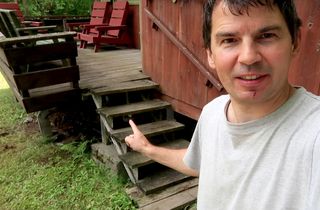 The story of Amogla camp 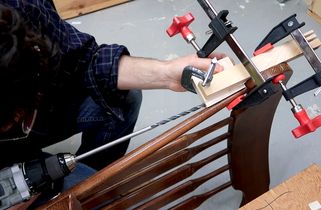