I made some very sturdy double tenon shelf brackets for some shelves in the basement, whose strength I demonstrated by crawling on the shelves. But I was curious — how strong are these shelf brackets really? I made an extra one when I built those brackets for testing.

I needed something very sturdy to mount the shelf bracket to. I picked one of the steel columns holding up the house.

The shelf bracket was more than strong enough to hold my weight standing on the tip of it. I weigh about 155 lbs or 70 kg. Rather than look for something heavier, I figured I'd get more leverage. So I clamped a piece of 2x4 to extend it. working my way out slowly, I got to 82 cm from the bracket with it still holding, but it broke at 87 cm.

Examining the failed joint, the tenon part had some not so straight grain to it, unfortunately, which caused the tenon to rip apart. I think a better quality piece of 2x4 could have increased the strength considerably.

I was curious how well a shelf bracket with the same geometry, but screwed together instead of tenons would hold. John Heisz made a video on making shelves like this, so why not test the idea? I used two 4" long screws near the top, and put them in at an angle, figuring that would hold better than straight in the end grain. I also put washers behind the screw heads, because, from experience, I knew that the screw often pull through the wood before the threads let go in the wood.

Testing this one, it last held at 70 cm and broke at 75 cm. Impressive, nearly as strong as the double tenon. Though this one did yield a bit before failing.

Examining it, the screw heads did pull into the wood a bit, but then some of the wood of the horizontal part ripped apart.

This was perhaps also not the best quality wood, but if the wood on the horizontal part hadn't torn, the screw heads would have pulled further through the vertical piece. Bigger washers would have helped.

Reviewing John Heisz's video about his shelves, with just one screw near the top, not at an angle, no washers behind it, and through just through relatively soft spruce plywood, there would be much room for improvement, but they held up for what he's using them.

This one last held at 55 cm out, but broke at 60 cm. Better than I expected and two thirds as strong as my double tenon piece! So even if I made the shelf brackets with pocket holes, it would have still been strong enough for me to crawl across the shelf!

The setup work for the double tenon joints was considerable, but once I had the machines set up, they were the cheapest, easiest, fastest, and most accurate joints to make. Next was the two 4" screws, and, surprisingly, the most work per joint was the pocket hole joints! 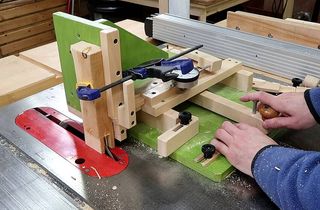 Can you squeeze all
the glue out of a joint? 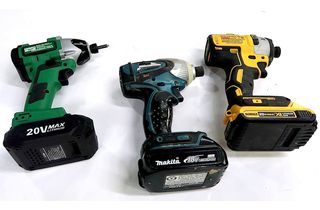