Last time I visited my parents, I had some "disposable" planer knives to resharpen, especially with having recently discovered that the glue in plywood nicks jointer knives. I didn't think my hand sharpening method would be suitable for these thin and long 12" (30 cm) knives.

My dad has one of these cheap and crude looking planer knife sharpening machines that he bought from Busy Bee tools years ago. Busy Bee still sells a machine that looks identical, as the "GRINDING BLADE SHARPENER 2PCS CSA"

That machine has a wider base, though that looks like it was added as an afterthought.

My dad's machine is a very simple affair, with a straight rail that mounts to the steel table. The position and angle of the rail are adjustable.

Another rail, with the knife holder, hooks over this rail. The rail slides side to side (just metal on metal) to provide the linear motion for grinding a straight edge on the knife.

I don't know if there was ever a manual for this thing, and if there was it's probably in English that's been badly translated from Chinese. So I figured out how to use the machine without a manual. Real men don't need no instruction manuals!

The first thing I established was that the edges of the sliding part are all precise and parallel. The reference edge for the sliding part really would be the part that hooks over the fixed rail, but that would be very difficult to measure to.

Having established that the edges are parallel, I then felt comfortable using the front edge of this rail to set all the screws to be the same distance from the edge.

I'm using the end of the caliper to measure the offset between the cast iron edge and the tip of the adjustment screw. I want these all to be the same distance from the edge so that the knife edge will be ground parallel to the back edge.

Now inserting the knife. These disposable knives have a cutting edge on both sides, so I have to be really careful.

The knife is clamped on with another rail that is held down by four screw knobs.

I set the angle of the sharpening machine to the knives mostly by eyeballing it. I then lowered the table until the knife was just touching the stone.

The height of the table is adjusted with a screw column at the back. As it's adjusted up and down, the table tends to rack and bind against the body of the machine. So the table moves in rather jerky increments. I have to say, that vertical adjustment mechanism is truly horrendously awful.

Thankfully, once it's set to a height, there's a screw on the front for locking it firmly, so so at least it stays put.

Grinding goes fairly smoothly, as long as I don't have to make any further vertical adjustments.

I keep moving the knife side to side, taking very light passes. It's important not to be too aggressive. If you work too fast, the blade will warm up near the front edge, but still be cool towards the back. Thermal expansion would then cause the blade to bow outwards towards the cutter from having more expansion on the warm edge than the cool back edge. But the grinder grinds a straight line. So once the blade cools down again, the blade ends up ground further back in the middle than on either end.

I didn't think that sort of thing would be much of a factor, but my dad has some 20" blades for his thickness planer that he sent away for sharpening that came back with a concave curve on them. In Northern Ontario, it can be difficult to find a competent sharpening service. And this little machine isn't really suitable for 20" knives. Then again, just looked up that machine, and it has a claimed capacity of 20"!

The machine did a really good job grinding the knives. I'm actually amazed that such a crude and imprecise looking machine can do such a good job.

The one thing that really needs fixing though is the table height adjustment. If I had one of these machines, I'd have to figure out a way to add some sort of fine adjustment mechanism.

Plywood on the jointer: bad idea 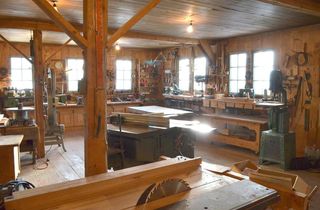