Based on Galen Winchip's design from 1981

My neighbour Reg showed me the wooden jointer he built a long time ago.

My first reaction was "that looks like the one I saw in Fine Woodworking".

Years ago I bought the "Making and Modifying Machines" book from Fine Woodworking, which was a compilation of articles on homemade machines from years past.

The book didn't say when this article was first published, but a google search for "fine woodworking Galen Winchip jointer" found a PDF of the article.

The one in the magazine was a 6" jointer, but Reg built it as an 8" jointer.

Reg was teaching at a highschool at the time, so he had access to woodworking and machine tools. The cutter head was milled from a solid piece of steel in the school's machine shop.

Getting such a cutter head milled professionally these days would probably cost more than a new jointer.

The infeed and outfeed tables are glued together out of smaller pieces of oak go give them more stability. They each adjust on inclines, one on each corner of each table.

There's a nice wooden crank for pulling the infeed table up along the inclines. Gravity pulls it back down, though sometimes it needs a nudge to slide down.

There is a wing nut under the infeed table for holding the table down and locking it in place.

This is the one thing that's awkward about this jointer, having to reach under the table to loosen the wing nut before adjusting the cutting depth, then reaching under again to tighten it. If it was mine I would replace that wingnut with a spring to pull the table down and also help it slide down the inclines when the crank is backed up.

With the motor sticking out the back of the machine instead of under it, there is room for a shavings compartment right under the outfeed table.

The fence sits on a platform behind the main table. This table is above where the motor is. This makes for a very solid support for the fence.

The original Galen Winchip fence is tiltable, whereas Reg's is fixed at 90 degrees. The advantage of that is that you don't have to worry about whether it's set at 90 degrees or not.

Testing it with a long wide piece of wood to see how straight it cuts.

Checking the result, I couldn't tell that it was bowed in any way.

And even though the jointer sat in Reg's garage unused, for 25 years. Reg only got back into woodworking in the last two years, and he hasn't made adjustments to this jointer since he started using it again.

Reg using his jointer. That's a Shopsmith mark 5 in the background. Reg has a separate table saw. The table saw part of a Shopsmith isn't very good.

Its interesting how the economics of hobby woodworking machines have changed in the 40 years since the 1981 fine woodworking article about this jointer.

In the article, the author, Galen Winchip wrote that it cost him $350 in materials, and that it cost about a thousand dollars less than a comparable factory built jointer. But he also wrote that he's been using this one for about 18 months. Add 6 months to write up and get published in Fine Woodworkin,g and that dates the jointer to 1979.

So while a lot of expenses like housing, education or health care have gone up faster than inflation, woodworking machines have gone up slower or even decreased in price. In large part due to increased automation and manufacturing overseas. Unfortunately this came at the expense of domestic manufacturing jobs. But no wonder people don't build homemade machines as much today.

Today, to make financial sense building a jointer, you have to build yourself a 12" jointer like this one. That will still cost over $500 to make, but 12" jointers are quite expensive, and big cast iron machines are impractical to move into most basements. 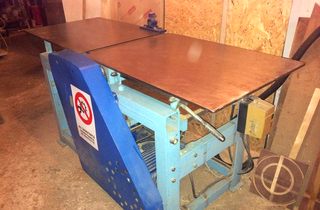