When cutting through very thick stock (10 cm or deeper), or when resawing, bandsaw blades often make a loud squealing sound. This is quite annoying, but not unusual.

When the blade squeals loudly, it also produces a cut with ripples in it, as you can see at left. That picture was taken with sunlight at a very low angle to the wood, so the wavy nature of the cut is very exaggerated.

Measuring those waves, I found them to be about 0.010" (about 0.25 mm) peak to valley. So they really don't add much inaccuracy, and they don't require much planing to get rid of. So the presence of these waves is actually not that much of a problem. Here I'm measuring the same board as in the previous shot, only the lighting is different.

I knew the blade whine and the ripples in the cut were connected to each other. I also figured that these ripples are like washboard patterns on steep gravel roads, in that once they get started, the pattern reinforces itself over time.

So I made a wooden bandsaw blade model with a simple alternating tooth set, and then experimented with what shape of slot these would want to vibrate in. A slot that is alternately narrow and wide, with the same period as the tooth set, will cause the blade to wiggle back and forth as it's pulled through.

If you look at the top tooth in the left side (the one with a black mark on it), that tooth is set to the left. Next, the blade is pulled one tooth further down, and the narrow gap of the slot is now occupied by a tooth set to the right.

So that will cause side-to-side vibration. The side to side vibration will, in turn, cause the wide parts to be cut more. Of course, through all this, the teeth rapidly wear away at the wood, but with the blade constantly advanced into uncut wood, there is always fresh wood to wear away. As long as the oscillations reinforce the waves, and the waves reinforce the oscillations, it keeps going. Of course, as soon as I stop pushing the wood, the waves wear away completely and the whine stops. You can see some spots where the waves aren't in the first photo on this page. This is where I briefly stopped pushing the wood.

The simpler left-right-raker pattern is more susceptible to whine. You can think of it as a simple left-right set, with all the right-set teeth offset a bit and extra raker tooth inserted after each left-right pair. It's still quite a regular pattern. And it's this repeating set that is more susceptible to blade whine. I imagine a simple repeating left-right set would have an unacceptable amount of whine, and that this is the reason none of my blades have that sort of set pattern.

Here's a picture of an actual bandsaw blade, viewed head on. The set is actually very subtle. The second "blade" in the photo is actually the same as the first blade, but stretched by about three times to show the set a little better. The raker teeth are marked.

You can also get bandsaw blades that have an irregular tooth interval. I imagine these would be even better at avoiding whine than the left-right-left-right-raker pattern, but they aren't very common, and I haven't come across such a blade in a store yet.

I'm also pretty sure that the expensive carbide tipped bandsaw blades are also less prone to vibration. With each tooth the full width of the cut, there's nothing that would lead to blade squeal. But I'm no fan of carbide tipped blades. I'd be willing to pay 3x as much for a carbide tipped blade, but they cost more than ten times as much as regular blades. The problem is, there are other factors that can mess up a blade, like bending it, or having the metal fail from metal fatigue. Carbide tips don't make the rest of the blade any less vulnerable. In the mean time, I can re-sharpen a conventional blade in a matter of minutes. So from a cost perspective, carbide tipped blades aren't worth it.

Update 2021
I wrote this article in 2012. Ordering new bandsaw blade, R & D bandsaws (in Canada) had the "woodslicer swift" 3-4 TPI resaw blade on sale. It has variable tooth spacing. I ordered one. The first one they sent me was cut to the wrong length, but I made it work on one of my saws anyway and made a video about it. It really does cut down on the squeal a lot!
See also:

Blade guide for
resawing on a 14" bandsaw 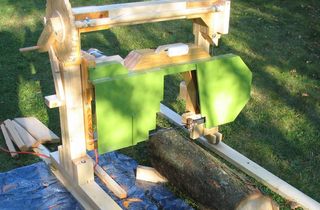