We have a deck with a lot of space under it that could be useful for storing outdoor stuff, but I would prefer it if things like the wheelbarrow didn't get rained on.

So I had the idea of making a roof under part of the deck to deflect the rainwater away.

I was able to get some used sheet metal roofing when a house in our neighborhood had the sheet metal roof re-done. The metal was still good, but it hadn't been installed properly.

My idea was to screw it on from the underside, through the ridges, like I'm showing here. But I wanted to have additional space above the ridges, just to let things air out better so structure doesn't stay damp as long after a rain.

Then I realized wind might end up lifting the roof up a bit against the screws from time to time, which would cause rattling.

So I decided to screw the roof down to some strapping, like it's meant to be. Just three pieces over a 2.2 meter (7 feet) length.

I figured the easiest way to transfer the hole location to the other side was to drill a small pilot hole from the top, all the way through.

I then flipped the panel that I made over...

... and used a larger drill to counterbore from the other side, to allow the deck screw heads to sink into the surface without the risk of splitting the wood.

I then flipped it back over, dragged it under the deck, and propped it up with milk crates to get it close to the right height.

Getting the first screw in was a bit awkward.

Then screwing on the bottom end. The bottom end screws to the support beam for the deck, so it's naturally about 15 cm lower.

The piece of strapping is very close to the edge of the sheet metal, so that the protruding edge presents less of a head banging opportunity for our kids who like to play under the deck from time to time.

And screwing on the middle part. I previously screwed this pressure treated 2x4 to the bottom of the joists to have something at the right height to screw onto.

There is about a 2 cm gap between the top of the ridges and the support its screwed to. A bigger gap will also make it easier to sweep debris off the sheet metal if any accumulates.

The supports for the sheet metal would be inadequate for carrying a snow load or wind load. But the deck holds the snow, and also cuts down on wind under it.

Putting the wheelbarrow down there.

It's a space for outdoor stuff, that is ok to get a little bit wet from time to time, but also stuff I prefer not to get rained on all the time.

Its also a good place to put some of the kids outdoor toys over the winter or drying lumber.

More projects around this deck 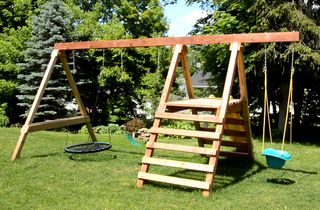 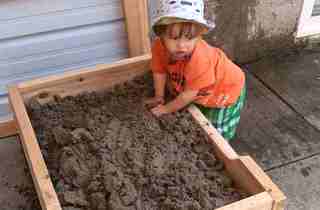 Sheet metal roofing for a shed 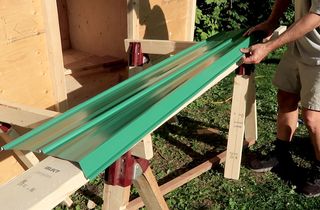 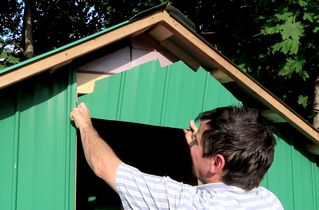 Sheet metal roofing and siding for my shed
More home improvement projects on my woodworking website.