I used this big carbide tipped dry cut saw to make most of the cuts when I built my lawn tractor trailer. It worked well, but I had the workpiece insufficiently supported and it got loose on several cuts, which resulted in about a third of the teeth on the blade getting chipped or broken.

Small thin angle grinder cut-off disks work really well for cutting off metal, and it occurred to me that a small angle grinder, in a jig that worked more like a sliding miter saw, could also be used to make flat cut-offs on larger workpieces.

My first thought was to have some sort of linkage, maybe like a pantograph, to allow flexibility of motion but to keep the cutting disk in the same plane, like a miter saw.

Then I had the idea of just sliding the grinder's guard along a table to achieve parallel motion, with the stock to be cut mounted vertically.

I cut a slot in a piece of plywood to allow the grinder to slide all the way around a workpiece.

I see a lot of people using small angle grinders without a guard. I think this is partly because you can easily buy 5-inch (127 mm) cut-off disks, but the small angle grinders are typically just 4.5", so the disks won't fit in the guard. Fortunately, the ones from Canadian Tire have about 1/4" margin around the guard, so a 5" disk will just barely fit within the guard, with less than half a millimeter to spare. It's tricky to get the disks on the arbour though, they need to be flexed a little to get them into the guard.

For added stability, I made a piece of wood to attach to the guard.

I mounted a piece of bed frame angle iron in the jig, mounting it at an angle and cutting through the most complicated part of it, just to make things difficult.

I hadn't actually tested this jig ahead of filming it, but it worked really well.

After the cut. Looks flat enough.

Looking at it closely, there is part of the cut that is about 1 mm lower. I'm not sure if this was because of the heat, or because I didn't hold the grinder flat enough, or maybe because of pre-existing stresses in the metal.

At any rate, for a piece this complicated, the cut-off was satisfyingly flat.

And here's one of the cut-off pieces. Looks dangerously sharp.

The angle grinder disk had about 1.5 mm of clearance inside the guard after these cuts, so possibly, the disk got about 5% used up from this cut. These disks don't last particularly long. But they are cheap and not as easily ruined as carbide tipped metal saw blades. 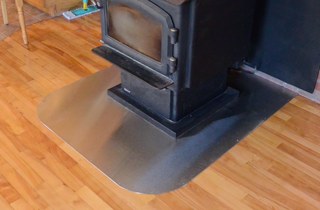 Machine taper with an angle grinder 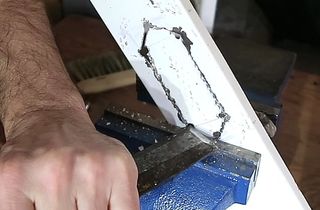 Metal shearing with chisel and vise