Having tried out the sander to make sure it works, it was time to finish up a lot of the details.

The first thing was to make a cover for the big hole that I made so that the wheel on the motor could pass through it. This cover is to keep the dust from inside the sander out of the motor.

In retrospect, the wheel is easy enough to get on and off the motor shaft so keeping it on the motor wasn't necessary. But some kind of cut-out would still have been necessary on the motor side of the frame to make room for the fan blade on the front of the motor.

The motor's shaft has two flat spots. I'm using two small #4 screws to screw between the flat spots and v-notches that I filed at the side of the hole in the wheel. This makes for a simple but sturdy way to couple to wheel to the motor.

The base is 18 mm "import" birch plywood, from China. It's a sort of imitation baltic birch plywood in that it's all thin birch layers like baltic, with voids, overlaps, and weaker glue.

Screwing on the back plate. This was originally going to be further left (towards the motor), but then I realized it would be better to extend it further to the right to allow for more room for a dust port hole without getting that hole too close to the edge. I realized that after I drilled the screw holes so I had to drill another set of holes for the new position.

Checking alignment before I mounted it, I found the frame was leaning slightly to the right on the base and could not be pushed vertical. The motor was hitting the base, so I had to take the base off and drill a shallow relief hole for a corner of the motor.

The L-profile shaped piece I'm screwing on from the bottom here is to support the part for adjusting tracking. When I hurriedly adjusted the CAD model for the bigger sander design, I forgot to make this part deeper as I made the base taller to accommodate bigger wheels. But it worked out well this way.

Part of the problem with trying to avoid the latest virus is that the kids are home and so I don't have time to do as thorough a job as I used to.

The block with the bump on it (bottom right of the image) gets pushed back by a knob on a threaded rod, which I'm screwing into the plywood here. I have two nuts jammed against each other on the threaded rod and am driving it into the wood with a nut driver on the drill.

I drilled and tapped two holes for the platen holder

Inserting the pin for the top to pivot on. I temporarily used a big nail with the intention of making a nice shaft with a knob on it like I did with the last one, but then decided the nail was good enough, and that saves time.

Mounting the table. My CAD model wasn't fully optimal in this regard and it turned out better to mount the table further back, so I cut the slot for the belt a little larger forward. I made appropriate adjustments in my CAD model for making plans of it later, when I find the time.

With such a big hole in the frame for the drive wheel to pass through, I decided to add a bit of extra reinforcement to the frame to stiffen it up.

This won't be part of the plans as it's shape and necessity is totally a function of motor size and type and whether you cut a big hole in the frame.

Even with my initial CAD model needing some adjustments, the shape of the frame didn't change from what I printed, so I was able to use the paper template I had left over from cutting out the frame to mark the profile for the enclosure on some 1/4" baltic birch plywood.

Then cutting it out on my 20" bandsaw. The 20" size of this bandsaw is very handy when cutting out big parts from the corner of a larger piece of plywood.

Next gluing together the inside part of the dust guard. I clamped these against the frame while gluing them to each other, but not to the frame.

After the glue dried, the pieces forming the inside of the sander's throat were one unit, and I used two clamps to just hold them in place. I then applied glue...

... and then clamped the front of the dust cover against them.

I cut the throat of the dust guard a bit deeper than it was on the frame, seeing that strength wasn't a concern for the dust guard.

The dust guard is to be held in place with a wing nut that goes onto a piece of threaded rod (circled in red). I marked where the hole for that needs to be drilled in the cover by placing it against the threaded rod and tapping it so the end of the rod left a mark.

I then drilled a hole where the mark was.

And putting it back on. Just one wing nut on this one. I used two on my 1x42" sander, but one is enough.

The on/off switch for the sander is a homemade NVR (no voltage reset) switch, using a relay with an AC coil. I needed a momentary switch for turning it on (holding the switch down engages the starter winding), but could not find anything that I liked, or at least for a price I was willing to pay. So the wooden thing against the bottom of the switch at left has a spring behind it, effectively making the toggle switch a momentary switch.

The sander is started by first switching the switch on the right on. This also powers up the socket for the sander. Then hold the switch at left for about half a second to engage the relay and the starter winding. A momentary interruption of power then resets the relay and stops the sander.

More about that motor

Thanks to the relatively flat direct drive motor the new larger sander has a smaller footprint than the older smaller sander.

Testing out the sander.

I painted the inside of the enclosure green as well to make it easier to see where the dust accumulates.

I also added a bit of a "lip" to the enclosure where the belt goes in. The idea is that it forces more of the dust into the sander. And on inspection after some sanding, that area is totally clean, so it looks like the dust for the most part goes into the sander. 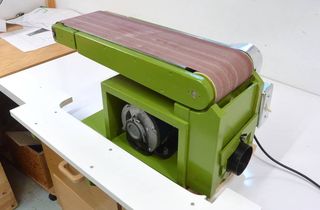 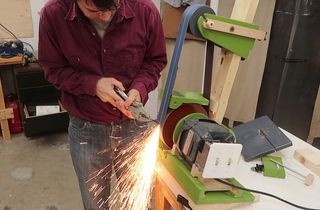 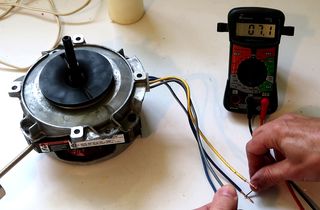 Figuring out the motor I used on this sander (video)