I use homemade blade guides for all my homemade bandsaws. But at this point, I also had three different commercially made blade guides, and I figured it would be interesting to compare them all, on the same bandsaw.

I made mounts for the commercial blade guides so I could try them all on my big bandsaw. I ended up making new guide posts for each upper blade guide for the experiment.

The first test was with my homemade blade guides. I cut some small circles both clockwise and counter clockwise, in some pine and some silver maple.

I'm using a 1/4" (6 mm) wide blade, because, I find narrow blades are harder to guide than wider ones.

The homemade guides worked as they always do, I'm used to them, not much to say.

Next I installed the blade guides borrowed from my cast iron bandsaw. Here mounting the lower blade guide that goes below the table.

Making the same cuts, from the same piece of wood. Again, nothing unusual. Although, with the upper blade guide this small, and no blade guard in place, visibility was really good.

Next using some aftermarket blade guides, these ones from sawblade.com (some of these), though they look just like the ones from carterproducts.com. They are nice and shiny and feel solid, though getting the adjustment right with the rollers was kind of annoying, especially because none of my Allen keys fit the set screws quite right. I also wasn't sure how tight to make them on the blade. I wanted the rollers to touch the blade, but not pinch it and spin constantly. This was very fiddly.

The guides performed nicely, making a nice whizzing sound, but using them was no different from using the other two guides that I tried.

Then trying some big blade guides that a reader from western Canada sent me. He upgraded the blade guides on his big bandsaw to ones from Carter.

These guides are kind of large and wouldn't fit next to the trunnion support beam on my bandsaw. So I had to make a new temporary table support just to make room for them.

I opted not to make trunnions for this test. Instead I used the screws and knobs just as clamps to hold the table on. Not the most secure, but it was only for one experiment.

The guides were kind of annoying to adjust to be really close. The pads on the guides can rotate, but if they bind with the blade, they can push the blade forward as they turn. Once set up, they worked as well as the other three blade guides. These guides were designed to be used with much wider blades.

And here's all the blade guides and samples that I cut with them.

In terms of cutting performance, there really wasn't any noticeable difference between the various guides. They all guided the blade perfectly well, and I certainly couldn't see a difference in cut quality. So I'll focus on other aspects.

But I found the shiny fancy guides from sawblade.com also quite annoying to adjust. The bearings are adjusted by turning the eccentric mount they are on, then tightening the set screw to lock them - same approach for both sides and the thrust bearing on the back. I fiddled around with them quite a bit. With guide blocks, I just push them lightly against the blade and tighten them, then make sure the blade slides easily, but if I did that with the rollers, the rollers end up spinning all the time.

The big guides from Ted (right-most above) have nice knobs on either side, plus a locking ring. So large adjustments are quite nice. But getting the guides to just touch the blade and rub lightly was fiddly to get right, so also kind of annoying.

The cheap blade guides from my 14" bandsaw were the easiest to adjust. The screws are on the front, loosen it, lightly push the blocks against the blade, and tighten again.

Blade guides obstructing the work are annoying. In this regard, the big ones from Ted were the worst. My homemade blade guides were slightly bigger than the ones from sawblade.com. The smallest were the ones from my 14" bandsaw, so that one is a winner there.

That said, the homemade blade guides, and the ones from Ted can take much wider blades than the ones from my 14" bandsaw or the sawblade.com ones. The guides from Ted could also handle a 1 1/4" wide sawmill blade.

The shiny guides from sawblade.com are by far the coolest looking. Next coolest, I think are my homemade guides, then the small ones from my 14" bandsaw, and last the ones from Ted.

Looks matter because, with no actual difference in performance, how good a set of guides is is largely a psychological factor. So guides that look cooler are just perceived to be better, and as a result you may well end up doing better work. Not unlike how looks are important for musical instruments.

And the winner is...

To me, the old guides I got from Ted were the clear losers in this comparison. For using a 1/4" blade, I liked the guides from my 14" bandsaw the best, for being compact and easy to adjust. That said, I don't think the lower guide is optimal. I think it would be much better to have the guide blocks above the thrust bearing instead of below to get them closer to the workpiece.

I have reservations about the fancy ball bearing guides. I When cutting soft wood, I could see some gunk starting to build up on the rollers, though the gunk came off on its own. The problem I see is, especially for the lower guides, as sawdust falls on them from the blade, they roll and press it onto the blade. Of course, I could leave a bit of space between the blade and the rollers to prevent that, but if there is a gap, then the guides aren't effectively guiding the blade. When I initially used roller skate bearings as guides for my first first homemade bandsaw, they were quite noisy. But these are larger ball bearings, higher quality, and new, so I didn't notice them making a lot of noise.

Overall, it makes me feel better about the blade guides on my old cast iron 14" bandsaw, and the guides on my homemade bandsaws. The homemade guides work just as well, and, surprisingly, aren't any more annoying to adjust than the fancy aftermarket blade guides or the big guides that Ted sent me.

I'd say, unless there is something really wrong with the blade guides on your bandsaw, don't replace them. A properly adjusted set of blade guides will guide the blade perfectly well, and a fancy aftermarket guides don't improve on that.

Blade guides for my 20" bandsaw 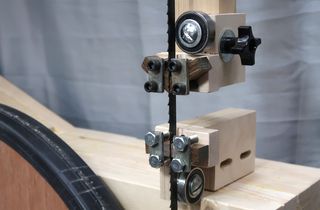 Blade guides for my 26" bandsaw

Increasing resaw height on my 14" bandsaw

Blade guides for my 14" bandsaw