Finishing, or varnishing is a mundane task at the end of a project, so I usually skip over it in my articles and videos. But enough people have asked "How do you varnish your projects?" that I figured I'd dive into it in more detail.

I'm no expert on varnishing, but I have a technique that works for me. My goal here is not advanced techniques, but to demystify the topic for beginners.

Here I'm re-varnishing the top for a dresser. The old varnish was an oil based varnish and quite beat up. I start by scraping the varnish off with a cabinet scraper, though this could also be done with a chisel. The scrapers or chisels need frequent sharpening, but they work faster than sand paper, and don't get plugged up.

The varnish I use most often is this water based Varathane diamond floor varnish. This all started with some remaining floor varnish (of a different brand) that was left by the previous owner of the house I bought in 2007. I used it on some of my projects, and I liked how hard, smooth and slippery the surface came out. So I started buying floor varnish after that. Don't know if it makes much difference, but I distinctly have the impression this stuff is harder and smoother.

I transfer the content of the can to plastic jugs, which makes it easier to pour out small quantities and reseal the container. Unlike oil based varnishes, the water based varnish doesn't go bad in a plastic container, even if the container is mostly empty.

I like to put it on quite thick on horizontal surfaces. Gravity causes it to level itself. For vertical surfaces, I have to use thinner coats because otherwise it runs and I get drip marks.

Once the first coat is dry and no longer sticky, it's ready for a light sanding. If it's warm and dry, this can be in as little as two hours. Sometimes I have to wait 12 hours.

I prefer to use a scraper instead of sandpaper for flat surfaces. The scraper cuts off the bumps more effectively than sandpaper.

Between coats, I clean the brush with soap and hot water. I lather up the brush with a bar of soap on the edge of the sink, then rub it in my hand until it becomes foamy, and rinse it off, then repeat. The varnish dries fast, so it's important to clean the brush immediately after use. I reuse the same brush probably about 100 times.

It takes at least three coats with the water based varnish. For softwood, such as spruce, pine or fir, it takes more coats, usually five.

I only sand lightly before the final coat to avoid accidentally putting gashes in the surface with a scraper.

I also try to make sure the surface is free of dust. Here I'm sucking the dust off with my dust collector.

Final coat, being more careful not to miss a spot.

And here's the final result. Not perfect, but much better than it was.

On rare occasions, if I have a lot of complex parts to varnish, and I can work outside, I apply the varnish outside with spray gun. But most of the time, the hassle of spray gun cleanup and hazards of airborne overspray make using a spray gun not worth the trouble.

The above was in 2015. It appears the formulation for Varathane changed some time between 2018 and 2020 to something darker and murky looking. But this newer varnish doesn't go bad as fast in a partly used can as the old stuff did. It also dries faster once applied, though not as fast as the water based stuff. It's also less smelly. This makes the oil based stuff nearly as convenient to use as the old water based stuff.

Advantages of water based varnishes
• Dries faster
• Less odour
• Cleanup with water
• Wood does not yellow or darken as much over time
• Very hard surface, scratch resistant
• Half empty cans don't "go bad" as fast

Advantages of oil based varnishes
• More flexible, resilient to cracking
• Better where it can get wet (won't crack from repeated moisture exposure)
• Less moisture permeable (acts as a vapour barrier)
• More working time, able to get smoother finishes
• Doesn't stick to fingers and fingernails as much

Of course, there are many other types of varnish, like shellac, linseed oil, beeswax, tung oil, etc. But I'm no expert at varnishing. The technique I use is relatively fast and it works for me. I hope this page is useful to someone just getting started. But if you really want to get fancy with varnishes, I'm the wrong person to ask. 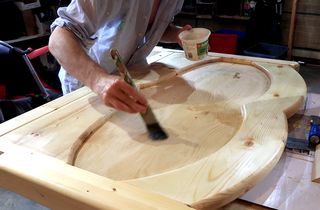 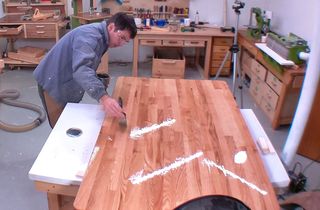 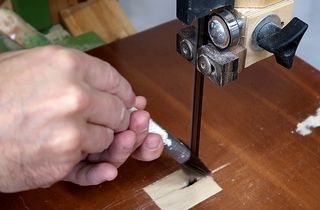 Soften a paintbrush with varnish dried into it

Pat Hawley on finishing a ukulele