What prompted this corner shelf is the salad bowl in this picture. We use it probably three times a week, but it's too big to fit in the upper cupboards, and it doesn't go well with the pots and pans. A small shelf to put it on would be a solution, just like this one at right, which I built a few years ago.

I used some pieces of oak that I cut from log sections that were meant to be split into firewood, first flattening them on the jointer, then resawing on the bandsaw, then through the planer to make short boards.

I made a mockup of the shelf shape out of cardboard. Here I'm checking that I have enough wood for it. I cut a corner off one board and added that to the opposite side to get enough width.

Gluing it up. The smaller clamps pressing down on the joint help to ensure the boards stay aligned while the glue dries.

The shelf is to be held up by a rail screwed to the wall. A dado along this rail holds the shelf.

The bottom side of this rail is a bit wider, with a decorative cove cut in it.

It turns out, I set the router bit a bit higher than it was meant to cut, so there was a bit of wood left on the corner. I cleaned that off with a small hand plane.

Once the glue dried, I ran the shelf over the jointer and through the thickness planer to clean it up. I love having a 12" jointer. That said, the joint was even enough that smoothing it over with a hand plane would not have been much work either.

Checking how the rail fits around the shelf.

Tracing the shape of the mockup onto the wood.

Then cutting it out on the bandsaw...

... and smoothing the cut on the belt sander.

The rails meet at the corner. I want the rails to join there in some way.

So I cut a sort of "box joint" into the ends on the bandsaw.

The finished joint pieces. The inside of the joint is a miter joint, the outside a box joint.

Joint assembled. The joint is there just to hold the rails in alignment. I won't be gluing it.

Now I can mark the actual length needed, and cut the rails to length.

I rounded the ends of the rails on the belt sander and, while I was at it, also rounded over the other edges.

Because this is going into the kitchen, it may get wet from time to time. For things that may get wet, a polyurethane finish, not water borne, is better. I bought this can of spray on polyurethane, and it's still good after a year. Much better than the polyurethane in a paint can, which seems to always develop a thick skin if the can has been opened just once.

That said, the spray varnish is much thinner than varnish in a can, and I had to give it a lot of coats.

I used 1/4" plastic drywall anchors to mount the shelf rails. With it mounted in the corner, it won't be pulling on any of them, so no worry about how well they will hold.

Rails mounted with just three screws. The shelf won't get much load in the back corner, so just one screw near the corner is enough. If I ever remove the shelf, there will be one less hole to fill.

The shelf itself is attached to the rails with two small screws from below. I left about a millimeter of slack between the edge of the board and the rail to allow for seasonal shrinkage and expansion of the shelf.

Salad bowl on the shelf. All done. 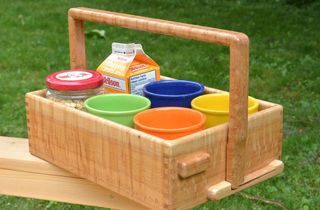 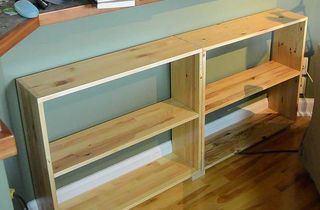 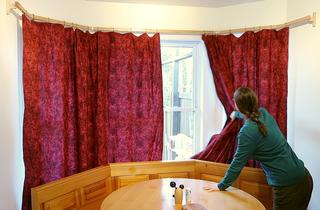