This impossible looking dovetail joint was a surprise discovery.

It's easier to make than it looks!

It started out as a test piece after I built my table saw dovetail jig. I made a dovetail joint out of some 2x6 material, which I had planed down to 34 mm.

With the joint, thick as it was, I decided to experiment with cutting it into a curved joint, by cutting away both the inside and outside of the joint...

... but with the joint cut at an angle, what revealed itself was a dovetail that is ambiguous as to which way it actually goes together.

It was a tight joint that held nicely even without gluing. So I was still able to slide it apart by pressing against it with my thumbs.

But I had to mark it so I'd know which side to push on to get it apart! It's that ambiguous.

Of course, this only works if you start with material that is thick enough. Not something you can do with a router-based dovetail jig, but my table saw dovetail pins and tails jigs were perfect for the job!. 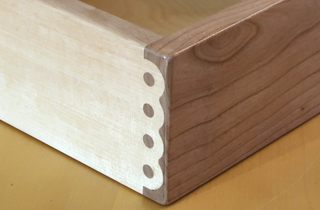 Dovetail joints
on the bandsaw 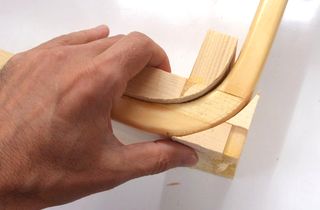